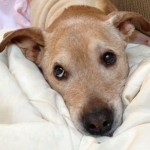 Miss Brendol is a 12 year old Pitt Mix that lives just North of Atlanta.  She was diagnosed with Osteosarcoma in her front right leg on January 30th, 2013.  The news was devestating to me and a non-issue to her.  All she knew was that her front leg was hurting.  A week later we got in to see a specialist to weigh all our options and the osteosarcoma diagnosis was supported.  Amputation was recommended and we proceeded with that the very next day, February 6th.

It has been one week since her amputation, and she is doing AWESOME!  She’s going up and down full flights of stairs and she’s back to getting into trouble.  She likes to get into things and drag them around the house when I’m not home.  (Like pulling pillows off the bed and dragging them into the bathroom)  Six days after her operation, I had her in a t-shirt and an e-collar when I went to work so she wouldn’t scratch her stitches… the booger managed to get out of her t-shirt with the knot still tied in it and with the e-collar still on, not once… but twice.  So, no more t-shirt.  That’s pointless.  Then yesterday she managed to lock herself in the spare bathroom and play in the bathtub.  Only problem, she got in but couldn’t figure out how to get out.  Mom to the rescue.

With her doing SO well, it is hard to remember that I still have some big decisions to make regarding her treatment.  Chemo has been recommended by the surgeon, and we have an appointment with an internist regarding our options there.  But with her age, I am inclined not to pursue it.  We will see what options are presented to us.  I have also found a veterinarian in the area that practices not just traditional medicine, but also holistic medicine.  We are contacting them as well.

A little bit about my Miss Brendol.  She was originally owned by a not very nice man that thought she was a Brindle Pittbull/Rottweiler mix (she’s fawn colored by the way).  He wanted a mean dog for whatever reason.  And I was stupid enough at the time to be dating him.  When I met Brendol, she was about 3 1/2 months old and cute as a button.  He was complaining about her acting out and doing things that puppies do.  I saw a sweet loving baby that had no interest in being mean nor any interest in being with this guy.  At our first meeting, she was running around and playing with me as puppies do.. and he was complaining about her never sitting still.  Within a little time, I had her laying in my lap and I was gently rubbing her forehead until she dosed off.  I was in love immediately.  So I suggested she come to my place which had a nice back yard to play in… and I just never gave her back.  I eventually got rid of the guy and kept her.  An awesome trade!  And she has been my cuddle bug every since.

She had a sister that passed away at a very young age (Sadie – a black chow/lab mix) and a feline sister that tolerated her presence for many years until about 4 years ago (Allegra – a himalayan).  After Sadie passed when Brendol was just a year old, we welcomed Aissa into our home, a little black Chow/Border Collie mix.  And about a year after Allegra passed, we welcomed two new feline sisters to the family, Mathilde and Morrigan.  Pictures of Miss Brendol and her family are below. 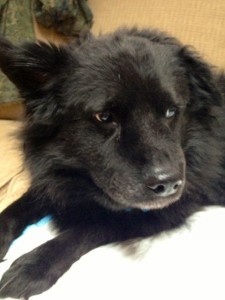 My furry family and I live in Atlanta. I care for a 12 year old pittbull mix (Brendol) who underwent an amputation of her front right leg for bone cancer. I also care for a 10 1/2 year old chow/border collie mix (Aissa) and two sister cats that are 3 (Mathilde and Morrigan). View all posts by Karma

6 thoughts on “Just getting started”